Before moving to Montrose water was something I took for granted. I turned on the faucet and clean water flowed. One of the factors influencing our decision to move from the Denver metro area was knowing water was limited. I remember reading how areas that were now developed in the area had rights to the water that had been available to farmers further east. There was a small community that had to have water brought in by truck for household use and many farmers lost their farms. When we moved to Montrose we noticed many yards landscaped with rock, not even qualifying as xeroscape in my mind. Our first home in Montrose had irrigation for the landscape, which meant we had a green lawn. The property to the north did not have irrigation and we learned it cost $600/month to water the yard! Now I understood the rock scapes.

Now I live on a farm. I understand how important water is. Access to irrigation was one of the “must haves” when we were searching for a property. We were planning to have a large garden so water was of greater importance than number of bathrooms, or age of the house. We have 4 acres of hay growing and until this year the hay fireld and two pastures were irrigated with open ditchs and weirs. Simple system really, but labor intensive and not effecient. Every 12-24 hours John would go out and place the next dam, tucking in the orange plastic tarp, move the metal gate to open or close the flow of the water into trenches. It would take 30-45 minutes minimum every day while the irrigation was flowing. We’d flood irrigate for two weeks, skip a week, repeat. Yep, it took two weeks of setting the water every 12-24 hours from the canal all the way across the hayfield, and the two pastures. 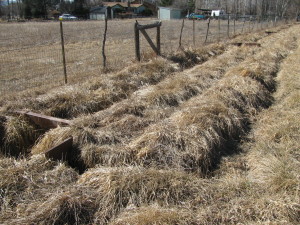 Water from the canal flows into this box, then into the buried pipe.

Last year we learned of a program through NRCS to convert open ditch irrigation to gated pipe. We applied and were approved. NRCS does the survey, draws up the plans, and they pay for about 75% of the cost. They only cover areas already being irrigated. We decided to extend the irrigation to be able to develope more pasture, that was on our dime. But the beauty of extending the project is the equipment was already on site, the additional pipe is tied into the main line, and we can extend it even further using above ground pipe.

The irrigation pipe is all assembled.  John & Matthew installed 492 little gates in the gated pipe and put it into place. Now the hayfield and one pasture need to be remarked.  The front pasture is tilled and will be replanted with a pasture mix (oats, grasses, clover, alfalfa mix).  The area we have added irrigation to will be planted with a cover crop late this summer, then next spring we will plant a forbe rich pasture mix suitable for goats & sheep.  Switching the water will be less labor intensive as it requires opening and closing gates, not moving tarps and metal gates. 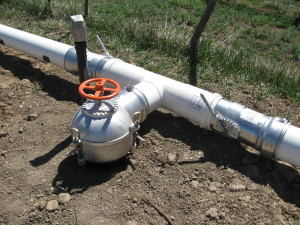 Hydrant over an alfalfa valve. We were able to use two butterfly valves to have the option of the water going right or left.

This morning I let the ducks out of their pen.  They quickly discovered the irrigation had overflowed into the “goat yard”.  I had a deep sense of peace and joy watching them waddle as fast as their short legs would allow out to the water wonderland.  Life on our farm is a lot of work but full of rewards.