Yes, we have a llama on our farm.  His name is Cuzco!

I was initially interested in getting a llama someday to protect my goats. I learned several years ago llamas were plentiful in Montrose.  At some point they became less popular and many were turned loose on BLM lands. When I first started asking about them I was told I should be able to acquire a llama for free.

One afternoon John came home from refereeing soccer to tell me a neighbor had offered us a llama. (Living in Montrose news travels fast ~ My “goat mentor” has two llamas and knew I was interested in adding a llama to our farm.  The llama had been offered to her, her husband said “No WAY!”)  We went to meet him and he was a sad site.  They had acquired he & another llama 17 years prior with the intent of using them as pack animals while hiking.  Turns out when their boys were old enough to back pack it was easier to have them carry their own packs than tow a trailer with two llamas.  So these two llamas lived in their back yard for years.  Cuzco had been alone for 6 years and they were looking for a new home for him. 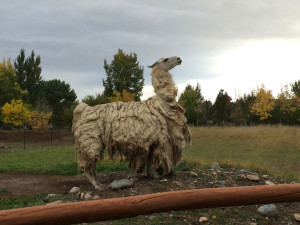 This is Cuzco when we first met him. 16 years old and never been sheared.

We added sheep to the farm last summer and moved Cuzco to the open pasture with them.  He’d already shown his protective side when dogs would come on the property, “herding” the goats to a safe corner.  Goats do not “herd” easily so it was quite amusing to observe.  Last December after goat breeding was done we moved everyone back into the polebarn part of the yard.

Cuzco is very friendly and calm.  He likes to meet you up close & personal, sniffing your face.  Many folks back away anticipating he will spit.  He has never spit at anyone.  He likes his neck rubbed, comes when called, and is the gentle giant on our farm.

His portrait is my cell phone wallpaper, I smile every time I see this face! 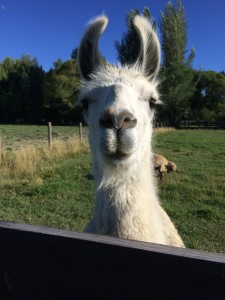 I love this face! Makes me smile every time.