We have added five turkeys to our farm. We had talked about the idea for a while but weren’t really prepared.  Then one day we were at Murdoch’s (local farm department store where you can get clothing, boots, tools, equipment, fencing, garden items, toys, and in season turkeys).  They were expecting their final shipment of chickens and turkeys the next week, so all the 3 week old birds were discounted.  I bought five.  We skipped the most fragile time of a poult’s life, the first two weeks. 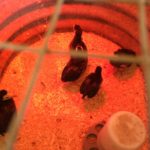 Their new home was a galvanized tub with a heat lamp and screen to protect them from the cats.  They were so small. 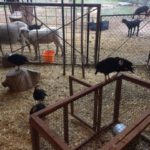 The turkey cage in the stall. The goats and sheep like to come stare, like they are on display.

We had ducklings on order and so we moved the turkey poults into a 4×4 cage.  The cage was built using pieces I found in the barn.  It gave them more room, a perch to roost on, and a view of the curious residents they would be sharing the farm with.  Once they had their feathers I would let them loose in a stall during the day, securing them in the cage at night.

One night we could hear one of our kids (young goat) screaming.  She had squeezed into the stall, but couldn’t get out.  John opened the gate and she trotted out like nothing had happened.  The screen top of the cage was bent, but still kept my poults secure at night. 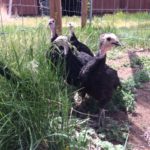 I had taken them into my garden one day.  They followed me everywhere, pecking at the ground where I was digging.  When I was done I caught them and carried them back to the stall in one of our cat crates.  The following Saturday I was working in the garden and realized with all the digging and weeding it would be fun to have them join me.  But they were no where to be found.  I had been letting them loose in the yard to “free range” and gathering them back into the stall at night.  I searched everywhere.  I wasn’t concerned a predator had gotten them because all five were missing.  Also they disappeared mid-day.  I did what so many due in this age of technology, I posted my turkeys were missing on Facebook, tagging neighbors.  Friends all across the country commented with concern, and their guesses as to what had become of my birds.  Foxes were a common comment.

Several days later a neighbor called, my turkeys had shown up on their porch Sunday.  I loaded the large dog crate (turkeys grow fast!!) into my car and went to collect them.  I secured them in the cage and they were not happy.  They were happy to be let out the next morning and have stayed close ever since, mostly. 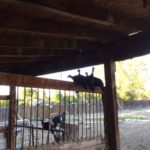 Roosting up high above all the others

They like to roost high in our pole barn.  Like 6′ off the ground.  They jump up on something, the cage, fence rail, anything will do.  Then they leap while flapping their wings and line up on the top beam.

Often when I head to the barn in the early morning the turkeys run to great me.  My husband said after watching this, he now knows where they got the “model” for the pterodactyls in the movie Jurassic Park.  I might actually watch it just to see if he is right 😉

Last Sunday as we were heading to church we spotted them across the road heading to another neighbor’s.  So we turned around and chased them home.  So far they are staying close to home.  But now at least everyone in the neighborhood  knows they are mine.

We added turkeys to the farm because I couldn’t get rid of the grass in my garden.  Turkeys, like chickens, like to scratch the ground and I’ve seen them completely obliterate large lawn areas.  The plan was to confine them to part of the garden where the grass was thickest, then once the grass was gone they would be allowed to free range.

There were several problems with this plan.

So now I have five turkeys roaming my farm.  They are messy and because they can fly they go wherever they please.  .  When they are in the garden they prefer to take dust baths and peck at my plants. And the grass is still occupying over half my garden

Many people approach health like I did getting turkeys.

You have a vague idea what you need/want.

And you charge ahead.

Is this working for you?

I have three questions for you.

I wish you many blessings of health and happiness,